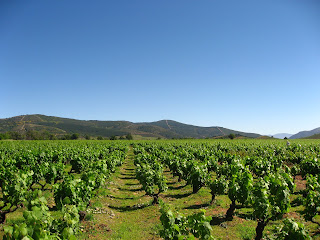 Today we journeyed from Ponferrada to Villafranca del Bierzo. This well-preserved (yet unfourtunately hilly) town is the last we will be stopping in before reaching Galicia. Feeling somewhat epic and courageous after "playing castle" in Ponferrada, we were ready for a much longer day of walking. Our first strech was a shortcut through a somewhat depressing main street populated mostly by empty building, furniture stores, and car dealerships. However, once we rejoined the Camino route we were rewarded by the rolling hills of Spain´s El Bierzo wine region. 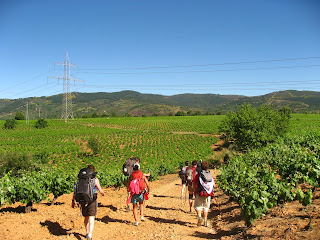 This was a welcome reward after a fairly boring couple of hours walking out of Ponferrada. Not only were the landscape gorgeous, but we happened to be walking through during the peak cherry (cereza) season! I bought a gigantic 3 euro bag of cherries from a man selling them on the side of the road and ate them before we even reached Villafranca. I was walking with Kevin C., Emilee, and Sara. About from Villafranca we stopped at a bar that was really a very nice old man´s garage for some refreshments. Naturally, Emilee charmed what we dubbed ¨the Sal Pugsley of Spain¨with her Spanish speaking skills- he played us some bolero music, made Emilee a delicious sandwich, a pourned me a very cold and yummy cerveza. 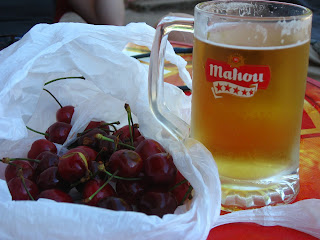 Fortified by our snack, we forged on to Villafranca only to be met with...more cherries! Emilee charmed yet another Spainard into giving us and entire tree branch of fresh ripe cherries. 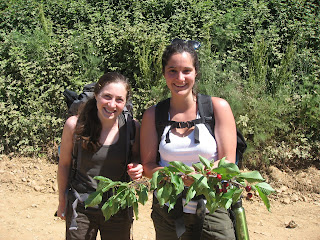 Finally, we reached Villafranca del Bierzo. We were immediately greeted by the sight of the Iglesia de Santiago, a twelfth-century Romanesque church made famous by the Puerte del Perdon or ¨Door of Forgiveness.¨This northern entrance is granted the same spiritual grace as the cathedral in Santiago so that pilgrims near death could receive the same indulgence as those who reached the Camino´s final destination. The door is closed now but luckily none of us had to use it anyway.

Nearby the Iglesia de Santiago is the Castillo de Villafranca. This castle is considered to be one of the best-preserved castles in the El Bierzo region and was built by the Marquesado de Villafranca in the late fifteenth-century. It is now privately owned so we could not go inside and play castle, but it is still an impressive sight.

As we journeyed to our albergue, we wandered down the Calle de Agua. This narrow (and a bit treacherous, considering that medieval people didn´t have any reason to build sidewalks in anticipation of motor vehicles) contributes to Villafranca del Bierzo´s medieval charm. Once inhabited by the nobles of one of Villafranca´s marquesados, Pedro Alvarez de Toledo, the houses bear the many crests of these medieval families. I like to think of it as a medieval lawn ornament.

Finally, we reached our albergue and went out to lunch as a group. Naturally, we shared a few bottles of the region´s famous wine. Between lunch and touring the city, a few of us decided to lounge around on the banks of the River Burbia. After cooling our aching pilgrim feet, we watched the clouds and identified some Camino arrow-shaped clouds in the sky. Perhaps the universe is encouraging us on our way to Santiago de Compostela!

During our tour, we also visited the Iglesia de . This church was allegedly founded by Saint Francis when he went on his pilgrimage to in the thirteenth century. It is famous for it´s Mudejar ceiling and a retablo from the sixteenth century. I think all that anyone will ever recall from the Iglesia de is the giant staircase we had to climb to reach it!

At the end of the day we shared a lovely picnic dinner in the town square. Dr. Gyug talked to us about the next day´s walk to O Cebreiro. Notice the upward hand motion. Yikes! Diana will tell you all about our arduous climb to this Galician town in the next blog post. 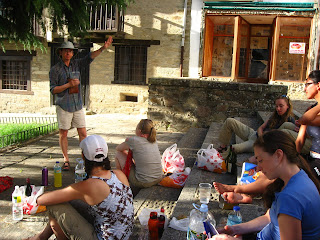 (Note: I have a few more pictures to illustrate this post, but albergue computers are not exactly lightening speed and they are talking forever to load…check back and I will post them soon!)