Santiago: We have arrived 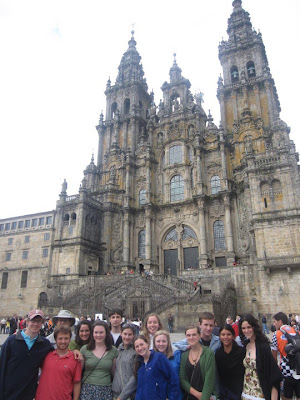 On June 12th, the Fordham Camino 2010 came to its conclusion as we made our triumphant arrival in the city of Santiago de Compostela. Apologies for the delay in blog posting, but internet access was limited in the hectic excitement of our journey's end.

Our day began early, nearly an hour before dawn, when we awoke to find that, at long last, the rain had stopped. We rejoined the Camino and headed into a dark patch of forest, still before sunrise, and began our walk. Despite being a respectable 20 kilometers, the day's walk felt much shorter, since we left so early, and walked so eagerly once Santiago was in sight. 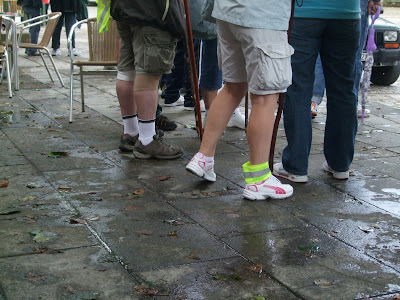 When we got to around ten kilometers left, Katie J, Sarah, and myself (Kevin) stopped for a break and encountered a busload of what can best be described as "fake pilgrims." If their lack of backpacks had not given away the fact that they were only walking for the day, their pristine white sneakers would have done the job just as well. After spending two weeks trudging through the sun, rain, and mud, we felt entitled to looking down on these folks, and question the necessity of walking sticks for the mere two hour walk from the point where the bus dropped them off. Almost everyone in our group had a similar experience with these ¨bus pilgrims.¨ A group of tourists even parted to make way for Diana and Kevin S., calling them ¨pelegrinos,¨ and giving them a sense of superiority over their pristine walking companions. However, we were put back in our place upon remembering that others had walked four times as long as we had, and by the thought that our very own Dr Gyug had completed the walk multiple times.
After a frustrating diversion from the traditional route of the Camino which took us around the modern airport, the city of Santiago de Compostela came into view from the top of the Monte del Gozo (Mountain of Joy). Despite having roots in earlier Roman and Swabian settlements, Santiago de Compostela derives its name and its prestige from events which took place in 813. A hermit by the name of Pelayo saw a mysteriously glowing mound of wood for several nights. He informed the bishop Theodimir, who returned with his entourage to find the bones of the apostle James and two of his disciples. Santiago, of course, is the Spanish for Saint James, while "compostela" means "field of stars," an allusion to the lights seen by Pelayo. 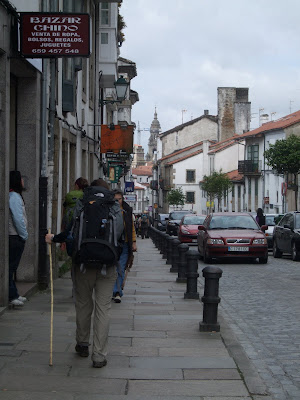 As is often the case with our large group, we arrived at the cathedral in Santiago in various smaller groups. The first to arrive were Dr Gyug, Katie B and I (Colleen). For the next half an hour we met our other walking companions in the plaza. Our arrival in front of the cathedral was something of a whirlwind, at least for me (Kevin). The combination of bagpipe music, cheering crowds, and the daunting facade of the cathedral we had walked so far to see was quite disorienting. The group met up again with congratulatory hugs from one another, and a quick group picture, before rushing over to drop our bags at the hotel and make it back in time for the pilgrim's mass.

As 2010 is a holy year, Santiago's streets were teeming with people. We arrived at the pilgrim's mass 15 minutes early and waited in line until we were able to enter the cathedral through the southern facade. Unfortunately, the mass was so crowded that three of our group were turned away at the door and those of us who were able to attend had to stand. The cathedral, as it is now, was built from 1075 to 1122 and finally consecrated in 1128. It is the largest Romanesque church in Spain and one of the largest in Europe. The outside is decorated in an ornate, baroque style featuring almost countless depictions of St. James.
Inside the church, one of the most impressive features is the Botafumeiro. (See the video, located at the end of this post). The Botafumeiro is the largest censer in the world. It was created in 1851 and is usually not in use. However, luckily for us, it is used in every pilgrim mass during holy years. Eight men are needed to control the censer, which while swinging almost reaches the top of the cathedral and hits speeds of up to 60 km an hour.

After mass we split up for various lunches, after which many of us collectively agreed that, having grown tired of the choice between wearing pants or muddy shorts, some shopping was in order. In preparation for our final evening together, at least half of our group headed out to the retail shops of Santiago, where we worked as a team to make sure everyone was looking their most stylish. We eagerly await the shopping montage, set to the song "Supermodel," in the final act of the film adaptation of our story. 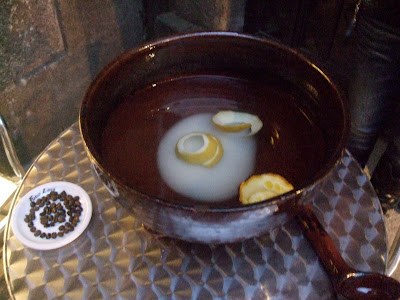 We later met up at a local restaurant to have our final meal together. Many toasts were made over our raciones and pilgrim meals. Since the World Cup also began a few days ago, we were able to watch the United States and England play while we ate. Afterward, we headed to a bar nearby to partake in a drink called queimada. Queimada is a traditional Galician drink that is made by stirring various alcohols together and lighting the concoction on fire. (Our Queimada is pictured above, prior to its being lit.) More toasts followed and the night ended with dancing and David Bisbal at another local bar.

The next day, many of us parted ways. Some of the group continued on to other cities in Europe to further their travels and many of us returned to Madrid for a few days of sightseeing and readjustment to city life after weeks in the Spanish countryside.

Hola friends!
If words are not your thing, here is a video to demonstrate the glory of Santiago!

P.S. Here is the queimada in its more or less full glory, being prepared. - Elizabeth 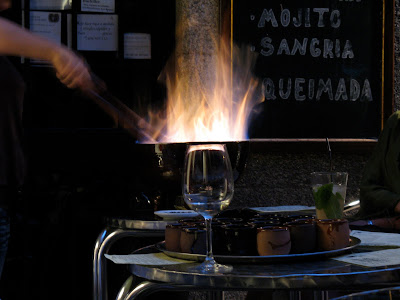