An Odd Occurrence in Madrid

Tuesday June 15th, 2010 began as another day on the job for one officer of the Madrid Police Department. However at around 5pm, his routine patrol of the park was shaken up by the appearance of a very strange site... A frightened and confused Templar Knight.
Now the truth behind the Myth:
Kevin S followed directions from Lucy and Elizabeth and found his way to a Medieval armor shop. Exercising an incredible amount of self control (as opposed to last summer when buying a full suit of Roman Centurian armor), Kevin purchased a Templar cape instead of armor. Eager to take his new look for a spin, he went to the park with Mike D, Diana, and Colleen. As soon as the coast was clear and no tourists were in sight, he donned the armor and went for a run... right into a police patrol. Stricken with fear of being arrested for general buffoonery, he discarded his knightly valor and fled. 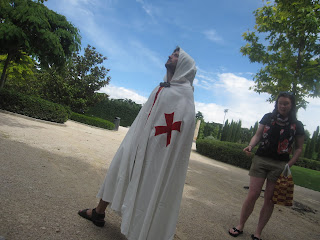