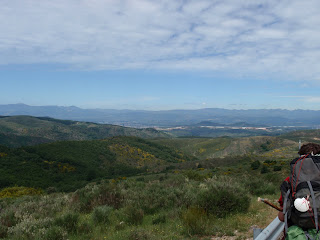 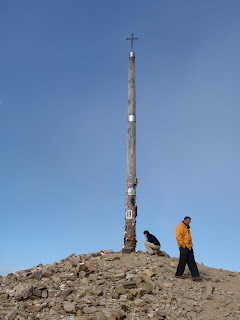 The trip to Molinaseca could be described as trying at best and there are not words for the worse. The morning began with a steady uphill into the fog/clouds. Up the mountainside we journeyed, onward into the mists. As we topped the cloud cover on the mountains there was a starkly beautiful view of the sky half grey with cloud and half brilliant blue. But the descent did not end, it continued on, through a series of winding paths, difficult rocky steps, and lovely wildflower fields.
At the top of the first peak there was the Cruz de Ferro, the Iron Cross. At the base of the cross is a massive pile of rocks, each brought by a pilgrim from their homes and left behind on the mountain top. Then a descent began, it was mostly gentle at this point and in the company of Liz, Reed, Lucy, and myself we formed something of a singing quartet to pass the time.
Due to the amount of songs we performed other pilgrims began referring to us as the singers from New York, which was rather entertaining.
Onward we tread into Majarin which sported the an avid supporter of the Templar and his store/lodge. Kevin S. of course spent a good deal of time there... The rest of the town was something of a ruin, as were most of the towns in the area.
Up we went again, and finally down, and what a down. The descent lasted for approximately 1000m closer to sea level.
Posted by Richard at 7:38 AM