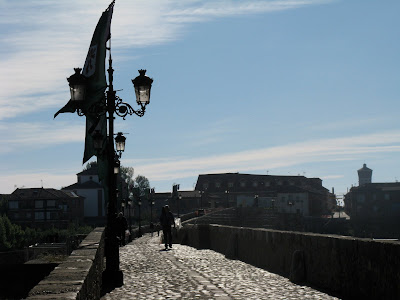 On the way to Astorga today we also passed through the town of Hospital de Orbigo, just about 7 km down the road from San Martin where we stayed last night. It was far too early to stop for the day, but not to admire the giant bridge which is the main feature of the town--it was originally Roman, and the current structure dates from the 13th century, although it was heavily restored in 1951, and is apparently now undergoing further renovations so much of it was covered in scaffolding. 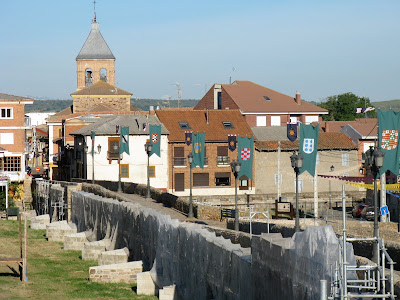 The bridge is famous for a tournament held there in in the mid-fifteenth century, when the knight Suero de Quinones, frustrated with the fact that his lady (whose name is unknown) was not paying attention to him, even though he had gone so far as to make a rash oath to wear an iron collar around his neck on Thursdays in her honor, appealed to the king to be freed from his oath if he defended the bridge of Orbigo against any knight who passed for 30 days or until 300 lances had been broken, whichever came first. So, with his 9 companions, he did. Only about 68 knights showed up, although from all over western Europe, so the 30 days happened first. There was one death. Suero also hired a cleric to write essentially an epic poem in honor of himself and his companions, recording the exploits of the tournament, which quickly became popular reading and explains the continuing fame of Suero and the bridge.

One way that fame was evident today was in the preparations visible in the river´s flood plain for the Justas de Paso Honroso, a tournament and medieval-ish festival held annually in Orbigo in commemoration of Suero´s original Paso Honroso. Sadly we´re missing it! It´s not till June 5-6. 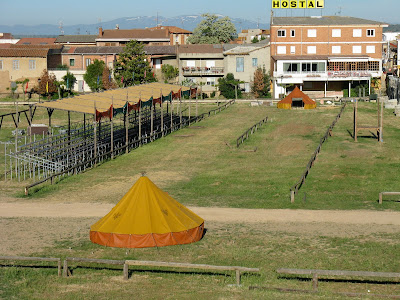 Orbigo was also an excellent place to get a morning cafe con leche at the Bar Don Suero de Quinones, and enjoy knowing that we´d finally left the highway and the plains of the meseta behind and were about to set out into new (and slightly less flat, and arguably slightly more interesting, if tragically less full of medieval fairs [until Ponferrada!]) vistas.
- Elizabeth
Posted by Richard at 12:04 PM 2 comments:

In this leg of our journey we abandoned the busy Spanish highways for the gorgeous countryside, filled with verdant wildflowers, poplar groves (in which I found for myself a sturdy walking stick), and fields of hops and wheat. I wish I could describe it in greater and more poetic detail. The skies remained completely clear all day. Spirits ran high after we crested our first few hills. For most of the trip I walked with Kevin C, Kevin S, Katie B, Katie J, Emilee, and Elizabeth, and as all of us are avid Tolkien fans we passed most of our time cracking jokes about the many similarities between the Spanish countryside and the Shire. After we crested our first few hills we saw again the great snow-capped mountain range looming in the distance, which we also fit into our Lord of the Rings schema (its identity alternated between the Misty Mountains and Mount Doom). As the mountain grows ever closer I wonder if I'll be able to walk over or around it--I guess we'll find out in the next few days if I am successful!

One memory that stands out as particularly symbolic of the Camino came in the last couple of hours in our trip, when we were all starting to get a bit tired and sore. We were walking up a rather large hill that was blanketed in wheat. As I was grabbing a drink from my Nalgene, I slipped and spilled the rest of my water all over the ground. It was starting to get pretty hot, so I was a bit upset to be without any water at all--especially since Astorga was the next source of water and was a good two hours away. As we crested the hill, the land turned into a wide, flat plateau of wheat, and not far ahead we saw a booth plastered in little hearts. The booth, it turned out, was filled with water, juice, fruits, and other snacks that were completely free for pilgrims. It was run on donations by a Spanish man who was very talkative and friendly. I thought it rather impressive that he was able to maintain this stand miles from any town. I was extremely thankful for a bit of refreshment, and we added this episode to a growing list of tiny Camino miracles. Truly there is a very different way of doing things on the Camino, from which I think we can learn a lot.

After a long and grueling trek up Astorga´s steep streets, we finally made it to our hostel in the center of of the city, not two blocks away from its magnificent cathedral. I wish I wasn't so tired from walking, as Astorga has a very rich past and plenty of sites to visit. The town itself dates back to the first century BCE, when it was founded as a camp for the Tenth Roman Legion under Caesar Augustus. Walls from the Roman days still encircle the city center, though they were slightly modified in 1242. Archaeologists have discovered, amongst other things, the ruins of Roman baths, a temple to Augustus, the domus (home) of a wealthy family, two sets of baths, and sewers. The Catedral de Santa María, which dominates the city's skyline, has a long history itself. It was begun in 1444 but not completed until 1708, so it represents a variety of styles. The east end where construction began is distinctly Gothic, replete with Gothic arches and flying buttresses. As you move west, however, the cathedral's style changes until you arrive at an ornate and pink Baroque façade that clashes with the austere, gray east end. The interior also contains the remains of the original Romanesque church (built in the 11th century) and a Renaissance altarpiece, but unfortunately we were unable to go inside because it is Monday, and everything is closed on Mondays. This was the case for the Episcopal Palace designed by Antoni Gaudí, which was built in a neo-Gothic style (think Gothic columns and arches, but on a bishop's house instead of a church). I'm disappointed that we can't go inside, but it isn't the last cathedral we'll see.

All of us are terribly tired after our second day, but still excited to see what lies ahead. Tomorrow we journey again into the countryside and into the tiny village of Rabanal. 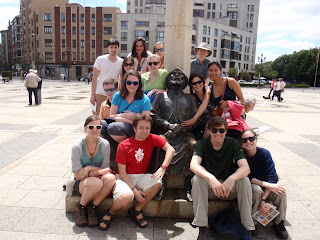 Our study tour began at 10am in front of the Leon Cathedral. This 12th century Gothic church towers over the rest of the Medieval town. We toured the outside of the building identifying biblical scenes carved into the stone and wooden entrances. Upon entering the Catherdral we were all awed by the stained glass that has survived throughout the centuries. Our second stop was St. Isodoro, a building whose architecture is comprised of baroque, gothic, and, renaissance styles. We visited the museum and pantheon which contain many treasures from the medieval period and the tombs of kings. Our final stop was the Parador de Leon, a building which originally served as a hospital for pilgrims on the Camino but is now an expensive hotel.

The rest of the day was spent exploring Leon, testing out our Spanish on the locals, and enjoying beauty of the town. We thought the best way to overcome our jetlag was to stay awake and visit several bars, which served complimentary tapas with each beverage. We were amazed to find cheap drinks, young children in the bars, and were dumfounded by the sun setting almost at 10pm.

We returned to our hostal to prepare for our first day of walking, which would begin at 7am.
Posted by Richard at 11:58 AM 1 comment: 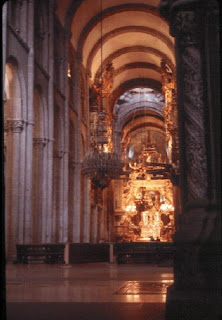 Once again, a Fordham group will be walking the medieval pilgrimage route, the Camino de Santiago, from León to Santiago in Spain between 29 May and 12 June.

In preparation, we have been meeting regularly to talk about readings and make presentations on the medieval pilgrimage and its sites. And to prepare our feet, the group has been walking from the campus almost every weekend out to City Island and back (with a stop for breakfast at the City Island Diner).

Once underway in a few short weeks, we'll be posting regularly on this blog, and looking forward to comments from family, friends and wellwishers!