Ponferrada: The Order of the Knights Templar vs the Kingdom of France

Never had a more noble host of peregrinos assailed the majestic walls of Ponferrada.
Today we completed the journey to Ponferrada, a town of great importance along the Camino, the cultural center of Él Bierzo region and the last major city before Santiago. The name Ponferrada is derived from the period of Roman occupation, (Pons Ferrata) literally referring to iron supports added by Roman engineers to a main bridge travesing the River Sil. 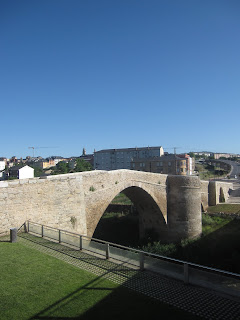 During the reign of Augustus the town grew to great prominence as a center of gold mining making great and frequent use of the nearby mines of Las Médulas. The great Roman chronicler Pliny refers to the process by which the Romans mined as "The ruin of the mountain". Roman engineers would empty large volumes of water into the canyons, breaking up the rock and allowing miners to sift through the upturned sediment to find gold. Following the Visigothic conquest of Spain the mines fell out of use and the town fell into disrepair. 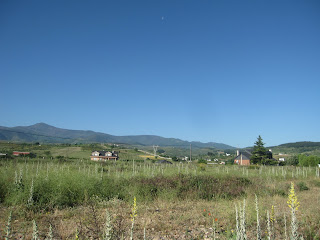 The town again emerged into prominence as a stopping point along the Camino de Santiago. In 1178 control of the town was gifted to the Poor Fellow Soldiers of Christ and the Temple of Solomon; better known as the Templars, as a gift for their successful participation in the Reconquista. Once under the stewardship of the Templar Order the town´s walls were greatly expanded and improved and its iconic castle began to take shape. The now famous Castle of Ponferrada served as the headquarters for the the Grand Master of the Castilian priories of the Order. 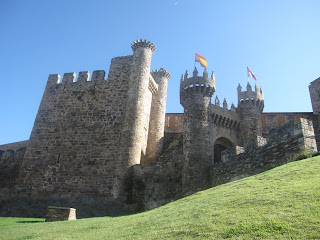 The Templars themselves were a monastic order dedicated to the Crusades. Saint Bernard describes these warrior monks as "A new knighthood", devoted to the true Lord, Jesus Christ and not to any fallible, feudal authority. The order became answerable only to the Pope himself and quickly grew in wealth, prestige, and importance. Not only an elite fighting force on fronts in the Holy Land and Spain, but the Order´s massive wealth came to rival and surpass many of the great kingdoms of the middle ages. It is very possible to conclude that the Order reopened operations in the long abandoned Roman gold mines and used this newly acquired gold to finance the construction of the castle as well as many of the great cathedrals and churches of the Kingdom of Leon.


The Templar dominion over the castle and town of Ponferrada ended in 1308 when the Grandmaster traded its control to Prince Philip in exchange for protection and safety during the upcoming purge of the Order. Following the disbanding of the Order and the return to royal control, continued renovations were made to the castle by the various counts and lords who held dominion over the Bierzo region. Finally in 1486 Ponferrada was absorbed into the Crown of Spain where it would remain.
A second major site of the city is the Basilica of the Virgen de la Encina. The beautiful 16th century Renaissance church was built to house a wooden relic portraying the Virgin and Child, supposedely carved by the hands of Saint Luke the Evangelist. According to legend the relic was lost in Spain during the early middle ages, only to be found in the forest by the Templars while cutting down a tree to be used in the restoration of the castle. Sadly the "true" relic has since been lost and a replacement has been constructed to take its place. The Virgen de la Encina has come to be a powerful local devotion attached to the region. 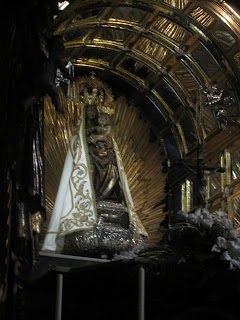 Being a young and ambitious medievalist with a great Templar obsession, today was beyond a doubt my favorite stop thus far along the Camino. Not only a great day to rest my feet after the hard climb yesterday, our group decided to play a game of Templars vs the French Government on the open fields of the old castle courtyard. With a shout of "Deus Vult!" the two armies charged forward into a pitched battle of pretend steel, invisible shields, and vain glory. Despite protestations from both sides, the match was declared a draw and a glorious Chansons de Gest was composed to honor the occasion. As expected I was remembered for bravely leading the Templars into the fray as Kevinis the Pious. The Castle stamp also contributed to a glorious afternoon as it is by far the most epic Camino stamp in the land. Buen Camino!

In honor of the Templars, I write this blog post keeping in mind that this page is "Non Nobis Domine". Kevin the Pious, Grandmaster of the Templar Order
Posted by Richard at 9:03 AM